For Sale: The Chelsea Home of Sir Peter O’Sullevan – The Voice of Racing

Sir Peter O'Sullevan's London home is on the market for the first time in nearly 50 years. Located in the heart of Chelsea, the lateral-living apartment captures the charm and character of the legendary horse racing commentator.

But this is not one property – it is two. Peter purchased his first apartment in Cranmer Court, Whiteheads Grove during the Sixties. Then when the flat next door came on the market in the Seventies he decided to purchase that too, transforming the two properties into one spacious home.

It still contains many of his most prized possessions. One of his famous top hats is safely stowed in a sturdy, brown leather case in the study. Elsewhere, trophies are a testament to his natural flair for presenting.  They sit on everything from table tops to tall boys. Numerous horse-themed paintings cover the walls and much of the floor, too. Hardly an inch of space is left untouched.

This was the scene of many dinner parties. His list of friends reads like an entry from Who’s Who from Rory Bremner and Terry Wogan to Joanna Lumley and Jilly Cooper.

Geoffrey Hughes, one of his close friends and Director of the Osborne Studio Gallery, specialising in horse racing paintings and bronzes, agrees: “He was a bon viveur holding dinner parties to the early hours of the morning.” [Peter was the gallery’s Chairman.]

“But he liked punctuality,” adds Geoffrey. “He would ring inquisitively asking where you were as the clock struck 7.05pm when you were expected at 7pm. Peter cooked all the food himself, including partridge and served fine wine right into his mid-nineties. You always came away feeling happier than when you went in.”

Peter’s associations with Chelsea stretched back many decades. During the Blitz, he drove an ambulance through the Royal Borough, playing a vital role in our country’s history. And his affection for SW3 never left him. While living in Cranmer Court, he would find the best places to eat and drink. He was even given a letter from Albert Roux – explaining that he and his poodles were welcome in any of the Roux brother’s restaurants.

And when he was not in the Royal Borough, race meetings beckoned from Cheltenham to the Derby. Peter shared his love of horses with the Queen Mother, who was another close friend. A black and white photograph of them can be seen in the apartment today. They were two of our nation’s most respected public figures.

Yet Peter’s passion for horsepower took an unexpected turn on a French motorway during his mid-nineties. “He adored fast cars and owned an old VW Golf, but was stopped by a gendarme when caught speeding at nearly 100mph on his way back from Paris,” explains Geoffrey. The policeman was so surprised by Peter’s age (ninety-four) and charm that he decided to let him go with a ticking-off.”

The Voice of Racing spent many happy years living in Chelsea with his wife Patricia (they were married for 58 years) and their poodles. Peter wrote his bestselling autobiography Calling the Horses in the Chelsea apartment.

Now the four-bedroom property is on the market for £2.5million with the all proceeds going towards The Peter O’Sullevan Charitable Trust. In total, once the flat is sold, in the region of £9m will be donated to the trust. In its 20th year, the Trust has distributed around £5 million to the Blue Cross, The Brooke, Compassion in World Farming, World Horse Welfare, Racing Welfare and The Thoroughbred Rehabilitation Centre.

So who would Peter like to buy the flat? “He would probably like a racing family to live here,” adds Geoffrey Hughes. “Someone from the racing world – Peter had a distinct desire for continuity.”

James Bailey, Chief Executive of Henry and James, who is marketing the property, agrees. “This home represents a piece of horse racing history. An owner with a love of all things equestrian would appreciate the property.”

Sir Peter O’Sullevan was admired by friends, colleagues and the nation. His distinctive voice and inimitable style will always be remembered. Now the property is looking for a new owner to take the reins, continuing this home’s long and happy history. 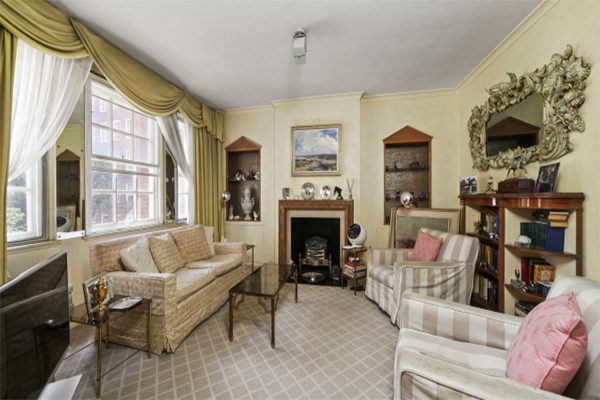