The Gotham star, Sean Pertwee on being Batman’s butler, football, following in his father’s footsteps and his love of London.

Q: How did you get started?

A: My family has been involved in the acting industry for about 300 years. I knew it was a different profession and was fun. I didn’t tell my father that I was going to be an actor or that I was auditioning. I was terrified of being accused of nepotism. He did exactly the same with his father, Roland Pertwee, an eminent playwright, actor and screenwriter. My Dad, Jon Pertwee, was one of the early Dr Who’s. I started at 16 and was still cutting my teeth at 17 in the Bristol Old Vic. It was a wonderful drama school, where we had access to one of the most beautiful theatres.

A: I would take my wife and my son. I think I’d take a firelighter, striker and a knife, too. That would be fine – I would go native.

A: It’s the greatest city. I like the diversity and the food. I am a Londoner and I’ve always been a Londoner. I love this city more than any other. New York comes second as a great city, but there is something about London, the diversity, the society and the culture. You can go from one side of the capital to the other and it’s completely different. It’s just bizarre and I enjoy that. I love football – I’m a Chelsea supporter and like being back home. It’s also an incredibly beautiful city. Nearly every road you walk along in central London has trees, it’s amazing. We’re lucky enough to live in Marylebone, which is pretty perfect. It’s beautiful. I’m a proud Londoner.

Q: What attracted you to Gotham?

A: My earliest TV memory is watching Batman with my father when he came home from the theatre. It’s great being a part of Batman’s early years now and playing his butler. We’re really starting to see Bruce Wayne grow up and Alfred is becoming his mentor and friend. It is interesting to see how the characters’ develop.

Q: What new projects are you working on at the moment?

A: Aside from shooting Gotham series 3, which starts filming in a month’s time, I’m about to start work on a documentary series. I can’t say what it is about yet, but it’s something that I am interested in. I’ve written one episode from a book called The Bureau of the Lost Souls, written by one of my friends, Christopher Fowler. It’s similar to Tales of the Unexpected with short stories about the underbelly of London. Ed Allen, Dave Allen’s son and myself wrote one episode and I would like to get it started. There would only be two or three central characters. It’s a small chunk of time and most actors would be able to do it. As the likes of Shatner did with the Twilight Zone back in the Sixties and Fifties, which I thought was fantastic, having Steve McQueen and all the big stars. We could get some great names involved.

Q: What is your dream role? And if you could act with anyone, who would it be?

A: I was very impressed when I met Sean Penn. He is an extraordinary actor as well as an exceptionally talented director. I’d be fascinated to work with him. Dream role? Gosh who wouldn’t want to be James Bond, but I fear I’m a little old for that caper. And I don’t know about me in speedo’s any more [he laughs].

I’ll tell you what I would like to do one day, and it could never be superseded, it’s just a fantasy. I would like to play Titus Andronicus, because my friend Brian Cox played it when I was a very young actor. It is one of the most complex, extraordinary stories, so popular at the time with revenge and tragedy. It’s just a fantasy, I think I would be terrified, because it’s a three-hour piece. But it would be fantastic to work with Wes Anderson being the director.

Q:  Have you had any home disasters over the years?

A: I haven’t really had any home disasters, but Jackie [my wife] left the bath running once. It filled a glass globe lamp in the kitchen, where she was literally holding it up until the firemen arrived. It was just like a giant goldfish bowl.

Q:  Do you have any favourite architects or designers?

A:  I’m about to embark on one I hope. We’re going to buy a property in the US. It has a swimming pool and a full-outside kitchen, including a Big Green Egg (www.biggreenegg.co.uk) which they use in many restaurants these days. It’s similar to a ceramic barbecue that reaches an optimum heat. We’d have a smoker, a pizza oven, a fully stocked bar with twinkly lights. Jackie and I have decided, we’re going to get old together, and have a porch with a couple of rocking chairs. We’ll sit there with blankets on our knees with a glass of red wine, then put the teenagers in the outhouse! We’re looking at upstate New York. We’d send our son to High School and University in New York or Connecticut. We’d have a little place in Manhattan, but then the dream home would be a white clapboard house in Connecticut, near the water.

Q: What advice would you give to anyone who wants to get into acting?

A: I wish them the best of luck. The first thing you have to do is “girdle your loins” and prepare for rejection. Most people with their career choices, get fired four of five times in their lives. We get rejected constantly, the hardest thing to realise is that you are what you are, and you have what you have. Of course you can learn aspects of it, but treat every meeting, every audition as a learning curve. Get used to rejection, because it happens constantly and it will do for the rest of your life. It really hurts, but you just have to learn from it. And learn your lines for every audition. That’s something many English actors never did, but they do now, because work is so hard to come by. Treat every audition as a mini-film. 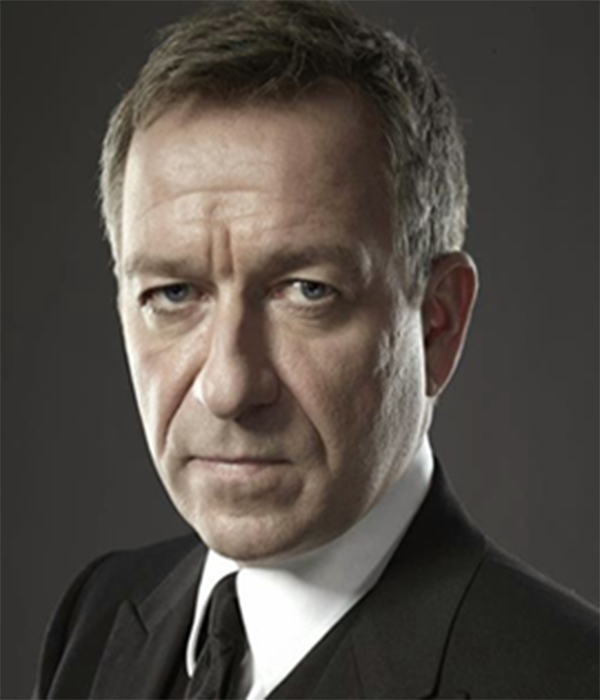